You know how you see those news stories about how so and so visited the troops for a goodwill concert - to boost the morale?  Well, I guess our current home qualifies as a place that needed a little morale boosting because on Friday night we were treated to a free concert from country duo Montgomery Gentry.

I love country music, and although Montgomery Gentry is not one of my favorite bands, I was still more than willing to go see their show.  Our plans were to take the kids for their first concert, but as the week wore on, the weather turned worse and worse.  We modified the plan to just Stevie and I going as our neighbor, Liz, offered to watch the kids.  But by Friday afternoon it was pouring rain (all day), breezy and chilly.  Steve decided he didn't want to be a "wet rat" so begged off, offering to watch Lydia instead if Liz and I wanted to go.  And after a week of having the kids stuck inside, we were just spirited enough to try it!

My fears of lines of traffic getting on base, lines to park, and being stuck outside the packed hangar in the rain were completely unfounded.  Liz and I ended up having a great time and Montgomery Gentry put on a great show!

Walking up to the show - looking to the left F-15's 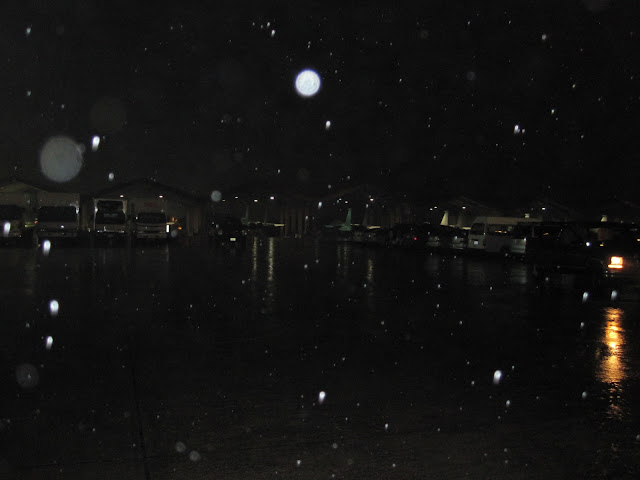 Looking strait ahead - concert in a hangar!  And yes, that's the rain pelting down. 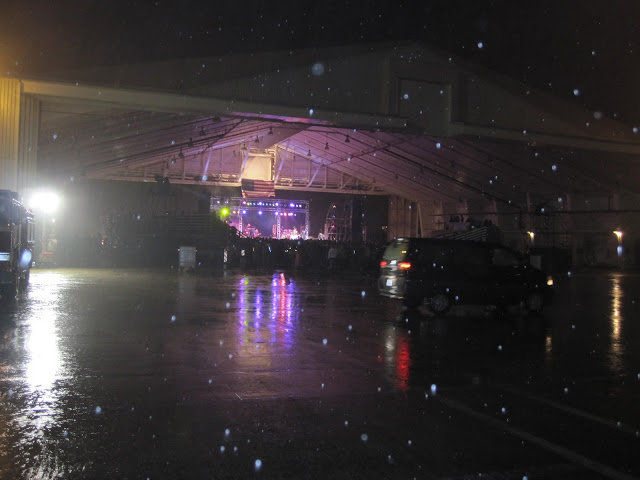 My lovely attire to keep me dry! 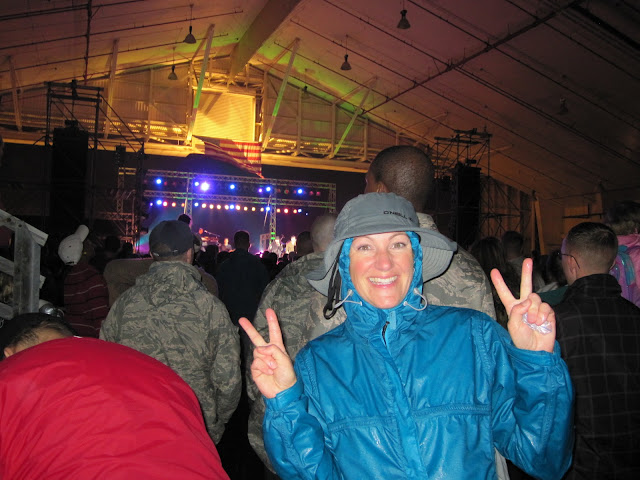 Where else do you attend a concert in your cammies? 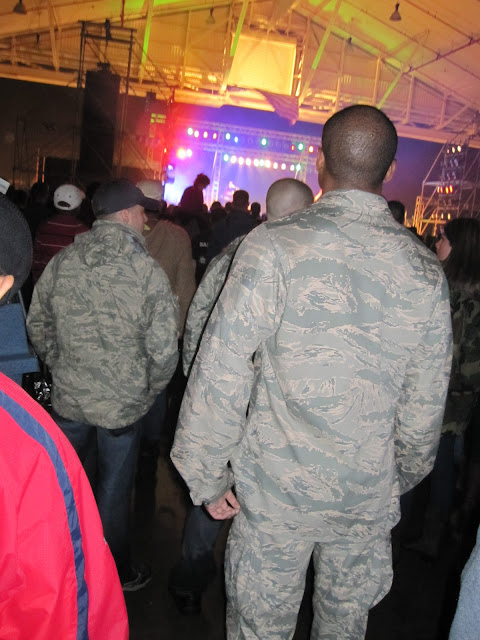 That's one BIG box of ear plugs.  Only in the military would they pass out ear plugs at a concert! 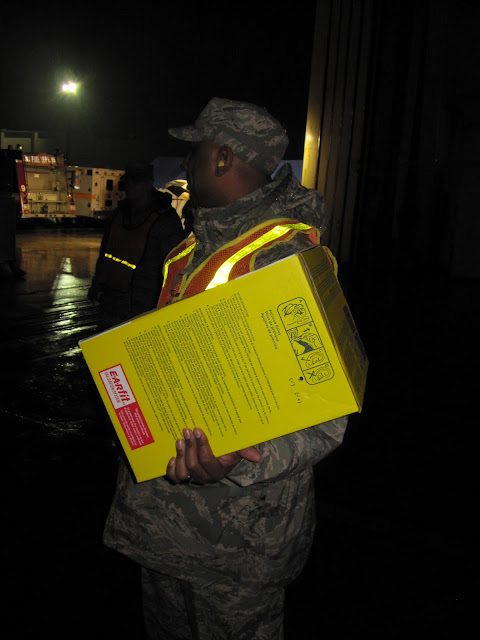 See the stage to the right and the tail of an F-15 to the left - how cool! 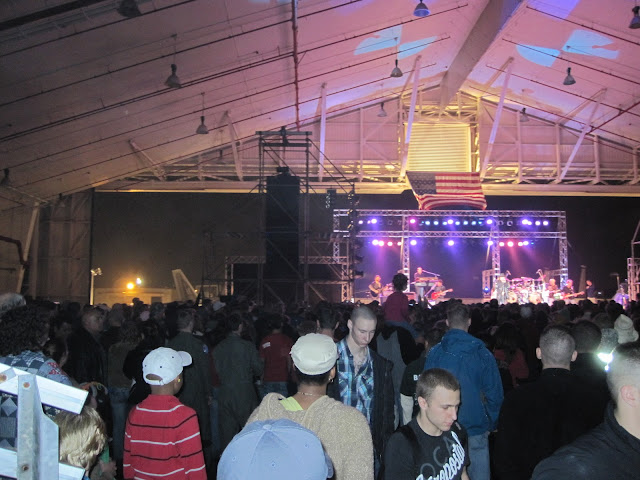 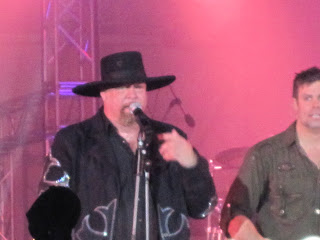 Liz and I - two wild and crazy gals! 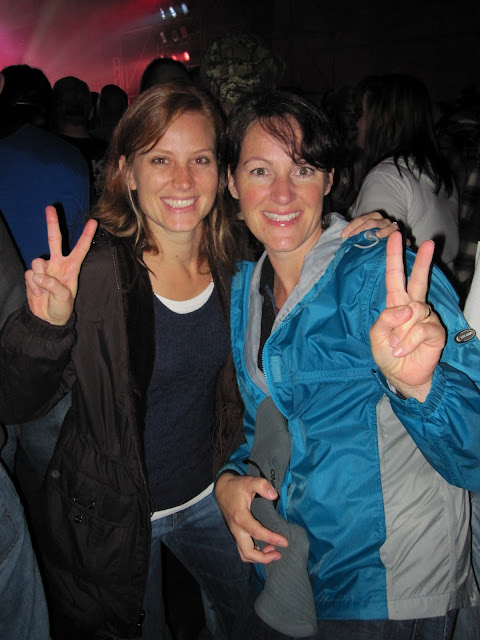 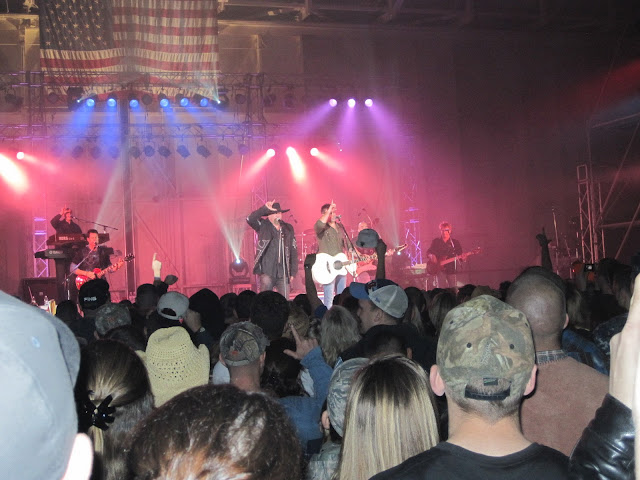 Sunday was a beautiful day - sunny and warmer than its been so we decided to head out to the biggest park on Okinawa so that the kids could ride bikes/scooter and we could have a walk.  One thing led to another and we ended up going with 7 other neighbors which turned out to be lots of fun.


Comprehensive Park is, as its name suggests, comprehensive.  There are trails and playgrounds, koi ponds and basketball courts, beaches and water park, and so much more.  We've been to the water park there and to feed the fish at one of the ponds, but not explored much more.  After getting all the kids suited up for their ride, we started along a path which meandered along the sea.

We made pit stops at this interesting rock formation and to get a close up look at the seaweed "farm". 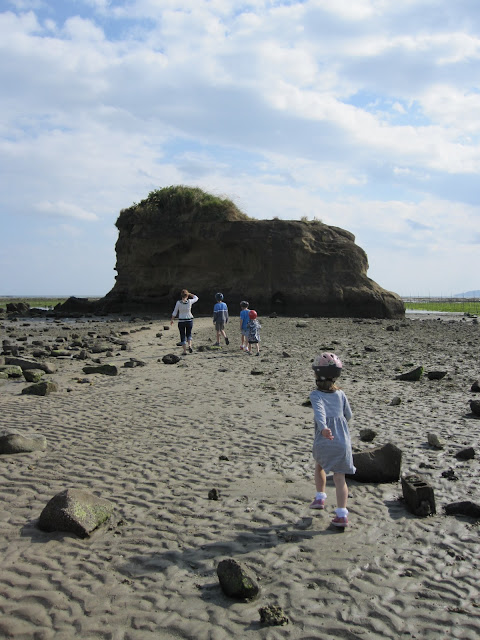 We ended up at the park where many, many Japanese were also enjoying this beautiful day. 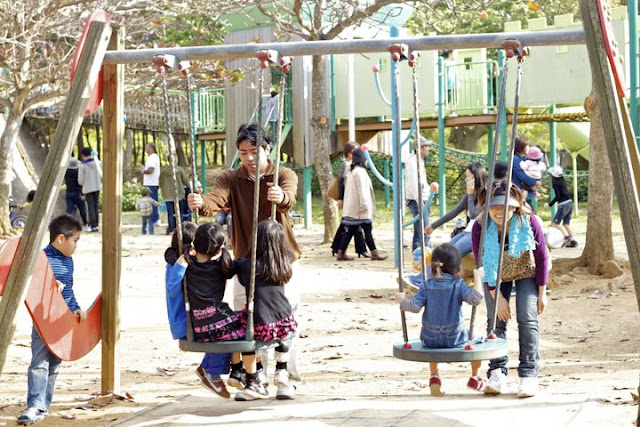 I don't know what it is about the skies over Okinawa, but we get some of the most beautiful sunsets around.  Maybe it's because my kitchen window faces west and so when I'm cooking dinner I stare at the sky at just the right time.  Or maybe it's the view from our perch on the hill.  Or maybe I'm outside a lot here playing with the kids.  Who knows, but I know they're fabulous! 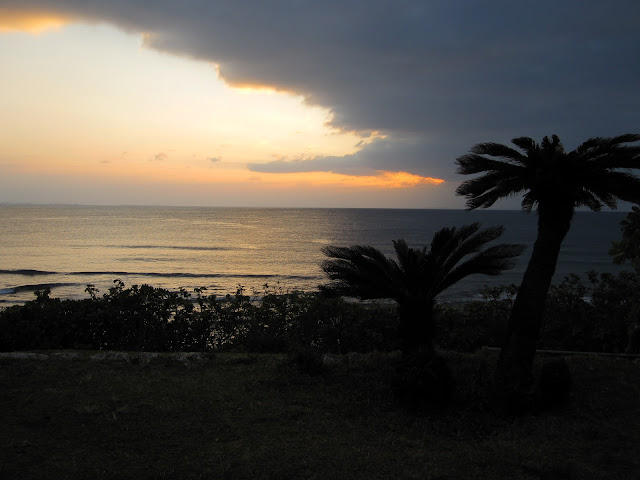 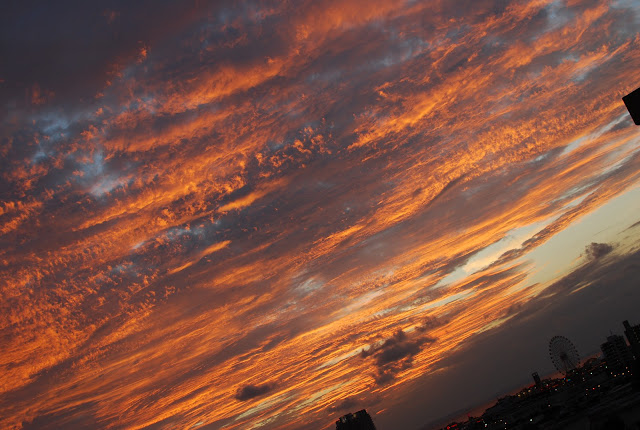 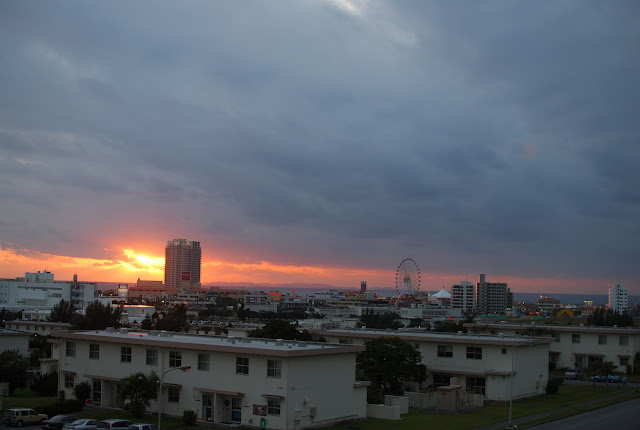 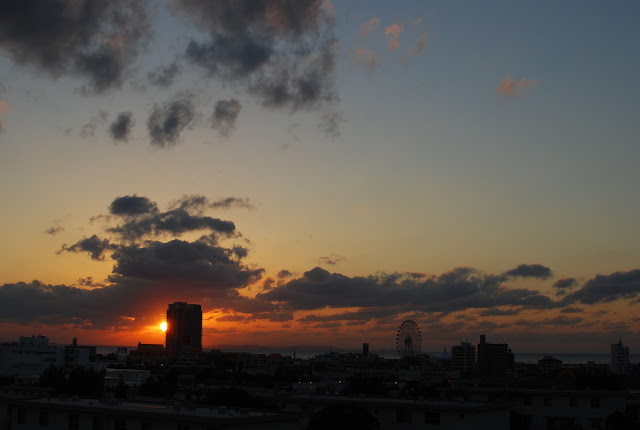 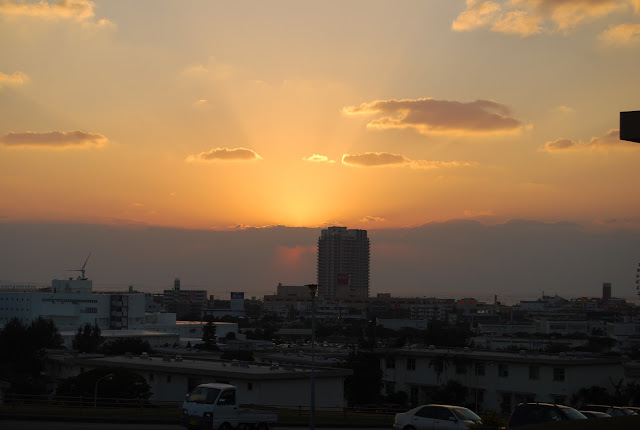 I saw on the sign board outside the elementary school as I was driving London to school this week that there is a science fair for the fifth graders and although Cannon isn't technically attending school, he can still participate.  So we recruited the help of our local experts (my dad who judges science fairs in SC and Stevie who has contacts at the hospital) and went to work.

From an extensive list of categories and topics on a great website (sciencebuddies.org), Cannon chose the "Death Ray" experiment.  Really, I think he just liked the name, but I thought it would be cool to do some microbiology.  Not that I really knew what I was doing as it's been a long, loooonnng time since I've been in a lab, but again, that's why I called in the experts.

Stevie was able to contact a pathologist who was really excited about helping Cannon with his experiment and in true doctor/military style assigned a lab tech to do the work with him!  HM1 Santiago has been an awesome help walking Cannon through the whole procedure and teaching him proper lab technique.  It's been really fun and I'm, as always, completely amazed with how fast Cannon catches on to complex ideas.  The basic experiment, for those of you interested, is to culture e-coli bacteria in petri dishes, expose one half of the dish to UV light at different time intervals, and see what length of time it takes to kill off most of the bacteria.

So after we ran the experiment, the plates had to incubent for 24 hours.  The next day (Saturday), London came with us as we went back to check on them. 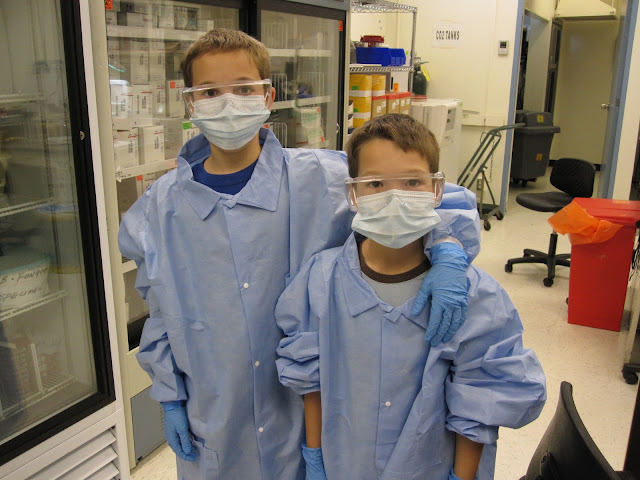 Bad news!  The concentration of e-coli was too much so he had to rerun the experiment... 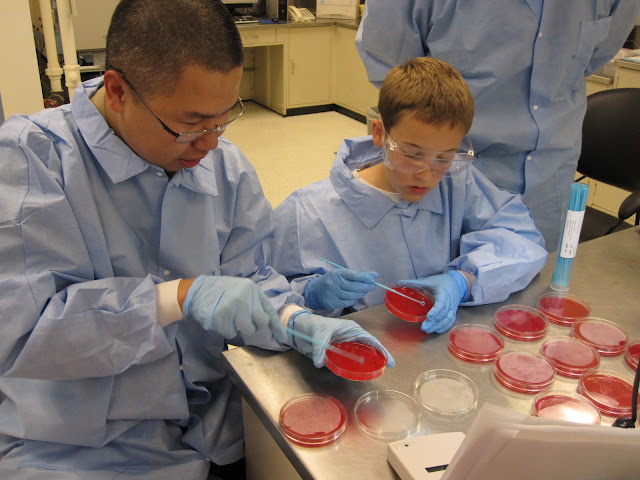 Day 3 - Sunday - We headed back to the lab again to check the results and once again had failure :(  Turns out plastic and glass are impermeable to UV-C light so when he shot the agar plates with the lids on, nothing happened!  I took this as a good time to teach him about the reality of science experiments and then we re-did the experiment, again.  Tune in for part two of the Mad Scientist...
Posted by Farm Girl at 6:29 PM 1 comment:

A Trip to Toguchi Beach

After running around most of the day doing errand/sports/vet stuff, I convinced (read dragged) the family and some of the neighbors (Krimp and Dima) to Toguchi Beach for a little air and exercise in the late afternoon.

Toguchi is a beautiful spot to go for a short walk, skip stones, play at the park and watch sunsets.  I love the rock formation that pops up out of the water like a jack-in-the-box.  What kind of forces of nature would leave one little outcrop of rock or carve a tunnel through another?  Just a thought to contemplate on a Sunday afternoon... 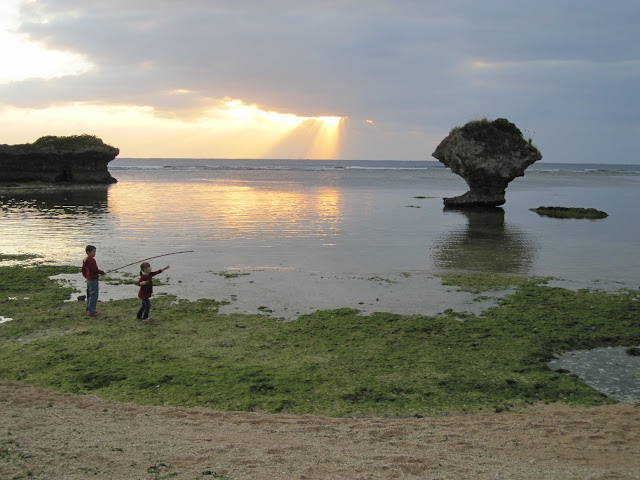 This is usually a great beach to find cone shells and sea glass, but today it was a little skimpy on its treasures. Nevertheless, the kids enjoyed skipping stones, "fishing" for seaweed and otherwise being kids. Krimp and I enjoyed taking pictures, and the guys passed the time throwing a football. Boy, am I going to miss being able to soak in this beauty! 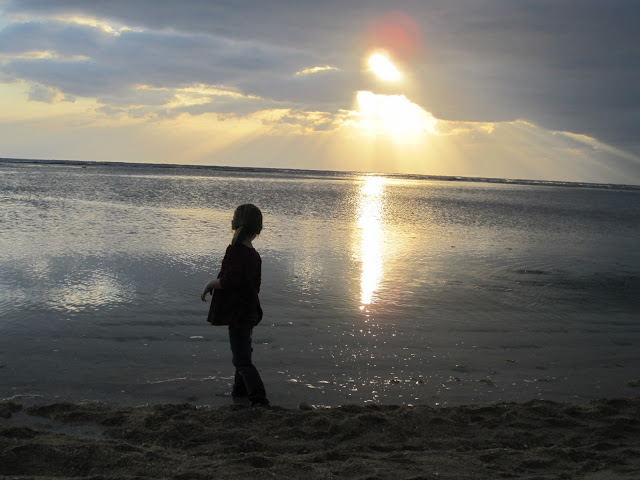 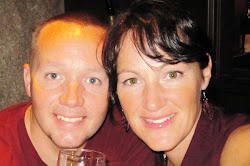